In this blog post, we’ll dig into the brand new materialized view feature of Cassandra 3.0. We’ll see how it is implemented internally, how you should use it to get the most of its performance and which caveats to avoid.

For the remaining of this post Cassandra == Apache Cassandra™

Being an evangelist for Apache Cassandra for more than a year, I’ve spent my time talking about the technology and especially providing advices and best practices for data modeling.

One of the key point with Cassandra data model is denormalization, aka duplicate your data for faster access. You’re trading disk space for read latency.

If your data is immutable by nature (like time series data/sensor data) you’re good to go and it should work like a charm.

However, mutable data that need to be denormalized are always a paint point. Generally people end up with the following strategies:

The materialized views have been designed to alleviate the pain for developers, although it does not magically solve all the overhead of denormalization.

Below is the syntax to create a materialized view:

The alert reader should remark the clause WHERE column1 IS NOT NULL AND column2 IS NOT NULL …. This clause guarantees that all columns that will be used as primary key for the view are not null, of course.

Some notes on the constraints that apply to materialized views creation:

An example is worth a thousand words:

In the above example, we want to find users by their country code, thus the WHERE country IS NOT NULL clause. We also need to include the primary key of the original table (AND id IS NOT NULL)

The primary key of the view is composed of the country as partition key. Since there can be many users in the same country, we need to add the user id as clustering column to distinguish them.

With the above example, both users ‘nowhere‘ and ‘nosex‘ cannot be denormalized into the view because at least one column that is part of the view primary key is null.

In the future, null values may be considered as yet-another-value and this restriction may be lifted to allow more than 1 non primary key column of the base table to be used as key for the view.

Before explaining in detail the rationale of some technical steps, let’s define what is a paired view replica. Below is the formal definition in the source code:

The view natural endpoint is the endpoint which has the same cardinality as this node in the replication factor.

The cardinality is the number at which this node would store a piece of data, given the change in replication factor.

If the keyspace’s replication strategy is a NetworkTopologyStrategy, we filter the ring to contain only nodes in the local datacenter when calculating cardinality.

For example, if we have the following ring:

For a view whose base token is T1 and whose view token is T3, the pairings between the nodes would be:

Let’s say we have 2 concurrent updates on an user (id=1) whose original country is UK:

Without the local lock, we’ll have interleaved mutations for the view

This issue is fixed with the local lock 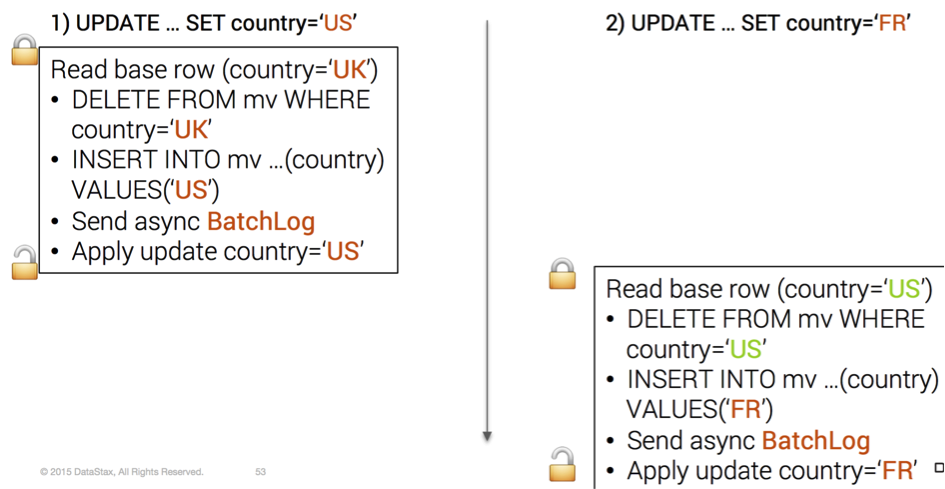 Indeed, it is necessary that the sequence of operations 1) read base table data 2) remove view old partition 3) insert view new partition is executed atomically, thus the need of locking

The local batchlog created on each replica for view update guarantees that, even in case of failure (because a view replica is temporarily down for example), the view update will eventually be committed.

Furthermore, the update of each paired view replica is performed asynchronously, e.g. the replica will not block and wait for an acknowledgement before processing to base table mutation. The local batchlog guarantees automatic retries in case of error.

The consistency level requested by the client on the base table is respected, e.g. if QUORUM is required (RF=3), the coordinator will acknowledge a successful write only if it receives 2 acks from base table replicas. In this case, the client is sure that the base table update is made durable on at least 2 replicas out of 3.

The consistency guarantee is weaker for view table. With the above example, we only have the guarantee that the view will be updated eventually on at least 2 view replicas out of 3.

The main difference in term of guarantee compared to base table lies in the eventually (asynchronous local batchlog). At the time the coordinator receives 2 acks from base table replicas, we are not sure that the view has been updated on at least 2 replicas.

The system property cassandra.mv_enable_coordinator_batchlog only helps in edge cases. Let’s consider below an example of such edge-case:

It’s very unlikely for all of those to happen, so protecting against that case while paying such a high penalty with coordinator batchlog doesn’t make sense in the general case and the parameter cassandra.mv_enable_coordinator_batchlog is disabled by default.

Compared to a normal mutation, a mutation on a base table having materialized views will incur the following extra costs:

In practice, most of the performance hits are incurred by the local read-before-write but this cost is only paid once and does not depends on the number of views associated with the table.

However, increasing the number of views will have an impact on the cluster-wide write throughput because for each base table update, you’ll add an extra (DELETE + INSERT) * nb_of_views load to the cluster.

That being said, it does not make sense to compare raw write throughput between a normal table and a table having views. It’s more sensible to compare write throughput between a manually denormalized table (using logged batch client-side) and the same table using materialized views. In this case, automatic server-side denormalization with materialized views clearly wins because:

Another performance consideration worth mentioning is hot-spot. Similar to manual denormalization, if your view partition key is chosen poorly, you’ll end up with hot spots in your cluster. A simple example with our user table is to create a materialized view user_by_gender

With the above view, all users will end up in only 2 partitions: MALE & FEMALE. You certainly don’t want such hot-spots in your cluster.

Now, how do materialized views compare to secondary index for read performance ?

Even with a smart implementation of secondary index like SASI that does not scan all the nodes, a read operation always consist of 2 different read paths hitting disk:

That being said, it’s pretty obvious that materialized views will give you better read performance since the read is straight-forward and done in 1 step. The idea is that you pay the cost at write time for a gain at read time.

Still, materialized views loose against advanced secondary index implementation in term of querying because only exact match is allowed, ranged scans (give me user where country is between ‘UK’ and ‘US’) will ruin your read performance.

We do not forget our ops friends and in this chapter, we discuss the impact of having materialized views in term of operations.

This section is purely technical for those who want to understand the deep internals. You can safely skip it

During the developement of materialized view some issues arose with tombstones and view timestamps. Let’s take this example:

ts is shortcut for timestamp

On the 1st update, the view status is:

The row (0,0) logically no longer exists because row tombstone timestamp > row timestamp, so far so good. On the 2nd update, the view status is:

The problem is that now, if you read the view partition (0,0), column c value will be shadowed by the old row tombstone@ts2 so SELECT * FROM view WHERE a=0 AND b=0 will return (0,0,null) which is wrong …

But then what should we do if there is another UPDATE base SET c=2 USING TIMESTAMP 1 WHERE a=0 AND b=0 later? If we follow the previous rule, we will set the timestamp to 1 for column c in the view and it will be overriden by the previous value (c=1@ts3)…

The dev team came out with a solution: shadowable tombstone! See CASSANDRA-10261 for more details.

The formal definition of shadowable tombstone from the source code comments is:

With this implemented, on the 1st update, the view status is:

On the 2nd update, the view status becomes:

And that’s it. I hope you enjoy this in-depth post. Many thanks to Carl Yeksigian for his technical help demystifying materialized views.