The previous 2 articles were dedicated to the analysis of Spring @Transactional and @PersistenceContext internals.

In this article we will discuss about the JPA extended persistence context (Hibernate long session) pattern.  We’ll look at the pros and cosn and finally I will show a practical implementation using the TransactionSynchronizationManager class shown earlier in both articles

First, if you’ve missed the articles about Spring annotation, have a look here:

The following implementation is based on Spring 3.0.5 official release + JPA 2/Hibernate 3.5.2 in a WEB J2SE environment. If you are running applications on a J2EE platform, you should rely on transaction management facilities provided by the J2EE engine itself

I The need for a long/extended session

The problem with the classical session-per-request or OSIV (Open Session In View) patterns is that for each new request made by the client browser to the server, a new EntityManager is created, attached to the current Thread using a ThreadLocal and is passed along all layers down to the DAOs. Once the response is sent back to the client browser, this EntityManager is closed so all entities that have been retrieved from the database are now in detached mode.

There are many drawbacks being in detached mode:

The ultimate idea is to avoid detaching entities, keep them in the persistence context and let the EntityManager manage as long as the user unit-of-work lasts.

The difficulty now is where to store this opened EntityManager whose lifespan spreads across several client-server requests. Furthermore, we need to bind each living EntityManager to the correct user session. The natural placeholder is the HttpSession map.

With global conversation, we need to:

As stated above, a clear navigation model for the GUI should be scketched out to help identifying entry/exit points for the global conversation. Below we introduce two types of navigation.

This is the most common type of navigation model. There are multiple entry and exit points. Some screens act as entry point for many scenario, some others act as exit point. 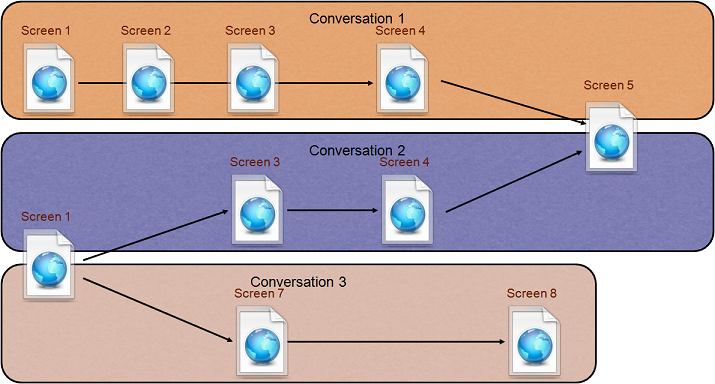 In this case, there is a single screen which is the pivot point for different navigation scenarios. Each new scenario starts at the same screen so the exit point for one conversation does match with the entry point for another. 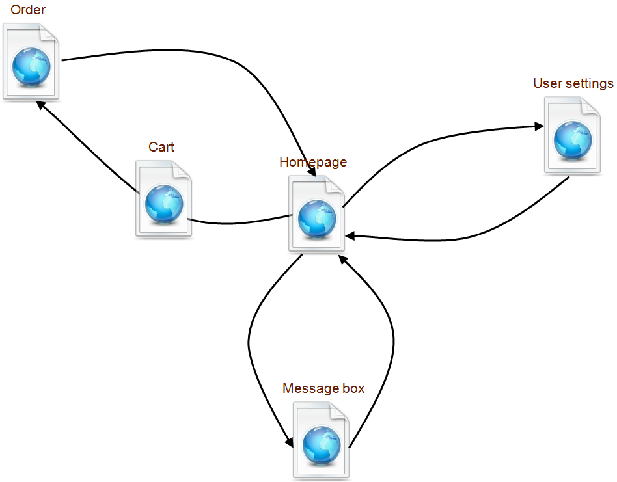 This sample implementation consists of 4 actors:

For the conversation demarcation, we introduce the following annotations: 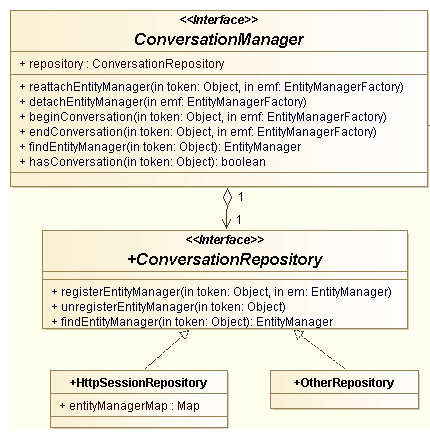 There are several possible implementations for this interface. The default implementation is the HttpSessionRepository. It uses the current user HTTP session as storage and keeps an internal map of all Entity Managers. 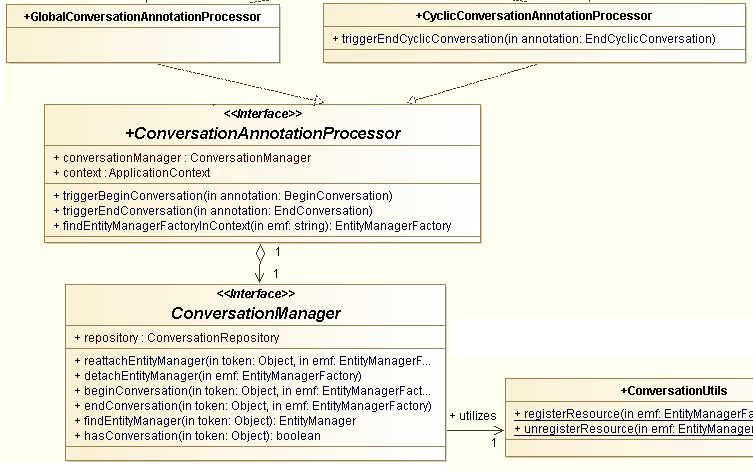 You may notice in the diagram the utility class ConversationUtils. This class simply helps to bind and unbind an Entity Manager to the Thread Local using Spring’ TransactionSynchronizationManager. 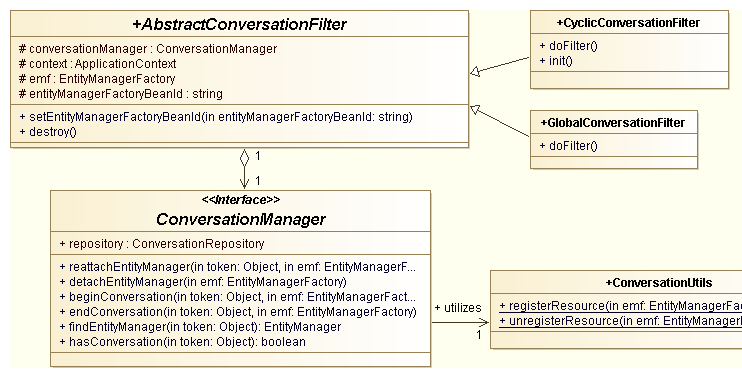 The AbstractConversationFilter class exposes the following attributes and methods:

Please notice that the token object is used to search for the Entity Manager in the internal Map. Consequently it should redefine the equals() & hashCode() methods.

The implementation is quite straight-forward.

The GlobalConversationAnnotationProcessor is a Spring AOP aspect. It defines 2 pointcuts to intercept any method annotated with @BeginConversation or @EndConversation then delegates the processing to the Conversation Manager.

Please notice the Ordered interface implemented by this class. This is important to define the order of this aspect when many aspects are applied to the same method.

Ideally this advice should be applied first and wrap all other advices.

A simple use case of this advice ordering is when @EndConversation is used in conjunction with Spring @Transactional. The @EndConversation advice should be the first advice to kick in and the last to kick out to flush the session and close the EntityManager.

This implementation introduces a new method: triggerEndCyclicConversation(). What is does it simply call ConversationManager.startConversation() as soon as the previous conversation is finished (lines 27 & 28)

The AbstractConversationFilter class provides a default implementation for the destroy() method. It also takes care of the initialization process through the afterPropertiesSet() method of InitializingBean interface.

If the entityManagerFactoryBeanId property is empty or if the corresponding Entity Manager Factory cannot be found in the Spring context, the filter raises an exception. It offers a convenient fail-fast behavior.

The GlobalConversationFilter implementation is quite straight-forward. The init() method is left empty since initial checks are already done in afterPropertiesSet() of the superclass.

Normally it does not make sense to inject a session bean into a singleton bean. The configuration creates a proxy which selects the appropriate instance of Conversation Repository for injection.

So by defining the Conversation Repository with session scope, it is indeed unique for each user session.

Instead of declaring the Conversation Filter directly in the web.xml file we rely on Spring DelegatingFilterProxy filter. This filter just delegates the processing to a bean in Spring context, thus allowing dependency injection.

Pay attention to lines 5 & 6 where we indicates the id of the target bean in Spring context. It is possible to omit this information, in this case Spring will look for the bean having the id equals to the filter name (globalConversationFilter).

At lines 9 & 10, we set targetFilterLifecycle to true to tells Spring to propagates the servlet lifecycle to the target bean. According to the documentation, the init() & destroyed() methods at the target bean are not invoked unless we activate this option.