Today we discuss about aspects precedence e.g. the order in which several aspects are processed at the same join point.

If you’re a heavy user of AspectJ you can sometimes end up with having more than one aspects for the same join point. In such case it could be interesting to know which aspect kicks in first and which one kicks in last. This order is called aspect precedence.

Without any specfic indication, the aspect ordering is totally unpredictable. It is not necessarily a problem if the aspects are totally unrelated.

To declare aspect precedence, you can use the special keyword

By “has precedence over“, we mean “is executed before“. Generally the aspect with highest precedence executes first. The execution order also depends on the type of advice. 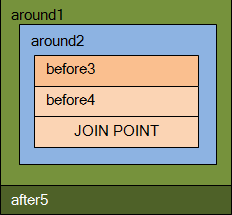 One best practice in AspectJ is to declare a special aspect whose task consists simply of declaring precedence for other aspects.

Please notice that in the precedence declaration, you can also use wildcards *.

It is extremely rare though perfectly possible to have several advices applying to the same join point in one aspect:

In such cases, it is the lexical order e.g. the order in which the advices are declared in source code which applies.