This basic question is in any Java 101 courses and the answer is quite obvious. But in fact things are a little bit trickier than they seem to be.

The visual representation of these variables in the program memory is:

The console output is:
myNumber before call = 12345

The result is not surprising. To understand what happened under the hood, let’s have a look into the memory zone: 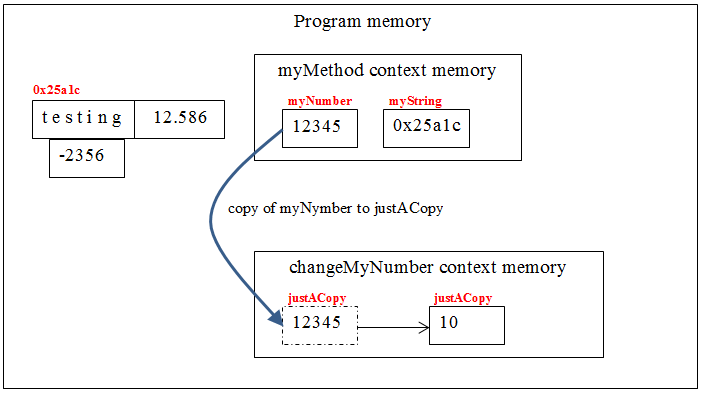 When calling changeMyNumber(), the “myNumber” primitive value is copied and passed to the method as variable “justACopy”. Now, whatever value we assign to “justACopy”, it does not affect the original value of “myNumber”.

The denomination pass-by-value is indeed incorrect, the proper name should be pass-by-copy-of-value because we do not pass the content of the variable itself but rather a copy of the content.

For non primitive variables, all parameters calls and returnings for method are done with references. When calling a method, all the references of non-primitive parameters taken from local context are copied and the copies of these references are passed to the method.

The console output is:
myString before call = testing

The result is this time surprising.  We expect that the “myString” variable will be the newly created StringBuffer and contains “another String” but it’s not the case. Let’s see what happened under the hood: 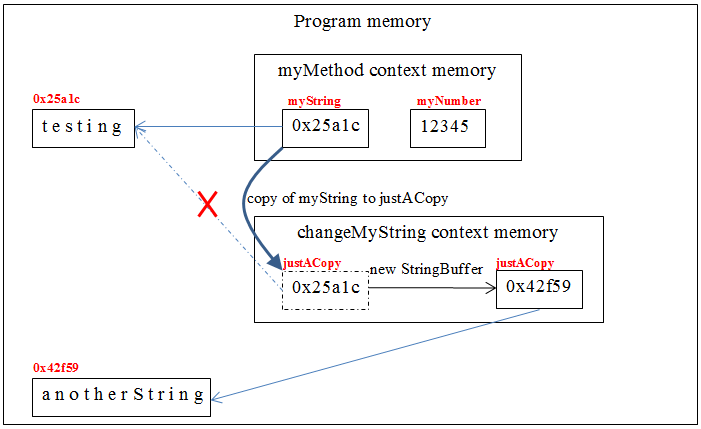 When calling changeMyString(), the reference to “myString” (0x25a1c) is copied and passed to the method. In the changeMyString() method context this reference is named “justACopy”. At that point we have 2 references pointing to the same memory location of the StringBuffer containing the “testing” value.

When doing justACopy = new StringBuffer(“anotherString”); a new StringBuffer is created in memory at the address 0x42f59 and now the “justACopy” variable is pointing to this new location. In fact the old reference “myString” is still pointing to “testing”. What is changed by the method changeMyString() is the copy of “myString”, not “myString” itself. That explains the output we got.

Again the pass-by-reference naming is incorrect, the proper name should by pass-by-copy-of-reference.

If we want to change the value of “myString” in the changeMyString() method, we could have done:

Rather than creating a new StringBuffer whose lifecyle is limited to the scope of the changeMyString() method, we could have changed the content of the original StringBuffer.